An adult and modern take on vampires
In Gavin Moxley's world, there is not a thin line between right and wrong. In a personal crusade to help severe a line of disease carried by a clan of vampires that are purposely infecting the human population; Gavin has no choice to be ruthless. Waiting for the infection to start within the person, Gavin executes them one by one. Gavin is not strong or powerful, so finding the persons before they turn into full vampires is ideal. This is Gavin's life, and nothing has changed it until a young half breed vampire, Solstice, attaches herself to Gavin. Asking for help and protection, Gavin unwillingly takes Solstice and agrees to protection for information leading to whereabouts of others that are infected. Solstice's existence leads to a dangerous game of cat and mouse. There is no where safe for either of them as they are consistently being hunted. Solstice is a rare breed and is wanted for her "ability". For Gavin, the past is not always forgotten. During their outing, Gavin starts coming to terms about his past and his family. His faith and humanity is tested during the turmoil that ensues. "Solstice" is a story about faith and love in a way that is completely unconventional. Torn between his hate and his love for Solstice he is thrown into a moral dilemma that only he can figure out. 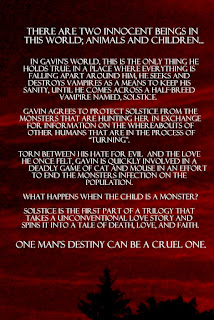 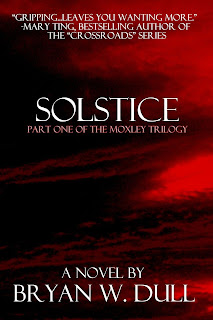 "I was hooked from the beginning and I couldn't put it down. Very gripping."~MARY TING AUTHOR OF CROSSROADS SAGA
"Bryan's descriptions and imagination leaves me speechless! The story is fast paced and flowed beautifully; I could easily see this on the movie screen one day.I highly recommend this book if you love a fantastic thriller/horror story with bite " ~LYNN WORTON
"Action-packed race to the finish line."  ~AUTHOR LISA RAYNS