LETS STOP ASSUMING, WE ARE UGLY, JUST BECAUSE...

Well, this is my first medical post, since I have started blogging....
I know, I never do these kind of posts, firstly, because, I don't like reading about medicos much, and so I don't, secondly, I mostly can't as this blog is more off best known for arts and books ♥
But, a video on Youtube made me rethink the statement, IF I MUST!!!
So, here I am, posting it, thinking and proving, YES, YOU MUST!!

Not many of us might know about Anorexia nervosa, but, I am here to tell you all about it,
First thing first,

Anorexia nervosa is an eating disorder characterized by immoderate food restriction and irrational fear of gaining weight, as well as a distorted body self-perception. It typically involves excessive weight loss and is usually found more in females than in males. Because of the fear of gaining weight, people with this disorder restrict the amount of food they consume. This restriction of food intake causes metabolic and hormonal disorders. Outside of medical literature, the terms anorexia nervosa and anorexia are often used interchangeably; however, anorexia is simply a medical term for lack of appetite, and people with anorexia nervosa do not in fact, lose their appetites. Patients suffering from anorexia nervosa may experience dizziness, headaches, drowsiness and a lack of energy.
Anorexia nervosa is characterized by low body weight, inappropriate eating habits, obsession with having a thin figure, and the fear of gaining weight. It is often coupled with a distorted self image.
ecent studies show the onset age has decreased from an average of 13 to 17 years of age to 9 to 12. While it can affect men and women of any age, race, and socioeconomic and cultural background, anorexia nervosa occurs in ten times more females than males. 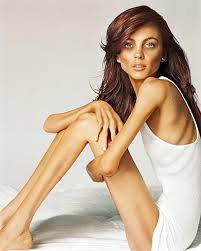 People with anorexia nervosa continue to feel hunger, but they deny themselves all but very small quantities of food. The average caloric intake of a person with anorexia nervosa is 600–800 calories per day, but extreme cases of complete self-starvation are known. It is a serious mental illness with a high incidence of comorbidity and similarly high mortality rates to serious psychiatric disorders. People suffering from anorexia have extremely high levels of ghrelin (the hunger hormone that signals a physiological desire for food) in their blood. The high levels of ghrelin suggests that their bodies are desperately trying to make them hungry; however, that hunger call is being suppressed, ignored, or overridden. Nevertheless, one small single-blind study found that intravenous administration of ghrelin to anorexia nervosa patients increased food intake by 12–36% over the trial period.
The term anorexia nervosa was established in 1873 by Sir William Gull, one of Queen Victoria's personal physicians. The term is of Greek origin:an- (ἀν-, prefix denoting negation) and orexis (όρεξη, "appetite"), thus meaning a lack of desire to eat. However, while the term "anorexia nervosa" literally means "neurotic loss of appetite", the literal meaning of the term is somewhat misleading. Many anorexics do enjoy eating and have certainly not lost their appetites as the term "loss of appetite" is normally understood; it is better to regard anorexia nervosa as a self-punitive addiction to fasting, rather than a literal loss of appetite.

Anorexia nervosa is an eating disorder characterized by attempts to lose weight, sometimes to the point of starvation. A person with anorexia nervosa may exhibit a number of signs and symptoms, the type and severity of which may vary in each case and may be present but not readily apparent. Anorexia nervosa, and the associated malnutrition that results from self-imposed starvation, can cause severe complications in every major organ system in the body.
Hypokalaemia, a drop in the level of potassium in the blood, is a sign of anorexia nervosa. A significant drop in potassium can cause abnormal heart rhythms, constipation, fatigue, muscle damage and paralysis.
Between 50% and 75% of individuals with an eating disorder experience depression. In addition, one in every four individuals who are diagnosed with anorexia nervosa also exhibit obsessive-compulsive disorder.
Symptoms for a typical patient include:

What is my advice, to all of you, out there in the world, is,  no matter what people say to you, you yourself must feel good and the fittest of all. And not just lean people are pretty, even people with healthy looking bodies are beautiful, and its just your behaviour that matters.
And no matter what,  ♥ IMAGINATION STATION ♥ loves you ♥

Thanx a lot for leaving your comment. We love hearing from you!! Have a nice blog tour and have loads of fun!! You might contact us at this address "imagination_station@aol.com"
Posted by Unknown at 04:20